Guwahati/Agartala, Dec 26
With the degradation of forests and shrinking of habitats, human-elephant conflicts are rising in the northeastern states, mainly in Assam and Tripura, with 971 people being killed by wild elephants and 926 tuskers dying from diverse causes since 2010 in Assam.
According to the latest census, India is home to 27,312 elephants and of them, Assam is home to 5,719 Asian elephants, the second largest elephant population in India after Karnataka (6049), a large number of whom often come out of the forests in search of food.
According to the officials of Assam’s Forest and Environment department 71 elephants including elephant calves were killed this year mainly due to being hit by speeding trains, poisoning, electrocution, ‘accidental’ deaths including falling into ponds and ditches, lightning strikes while 61 people including women died this year in attacks by the jumbos.
In May, 18 jumbos were killed by a lightning strike in Nagaon district of central Assam.
Herds of wild tuskers damaged huge quantities of crops, homesteads, residential homes and destroyed various other properties besides eating food stored in the homes of the villagers.
After Assam, the depredations of the wild pachyderms also took place in parts of western and and southern Tripura with four people killed by the elephants during this year in Khowai district alone.
Most of the animal experts and researchers felt that the increasing number of deaths of both humans and wild elephants is due to growing urbanisation, inadequate steps of the governments and destruction of forests and the environment.
According to the ‘India State of Forest Report-2019’, Assam has only 36.11 per cent forest cover out of the state’s total geographical area of 78,438 sq.km. Out of the total of 28,327 sq.km forest area in Assam, only 2,795 sq.km is very dense forest and 10,279 sq.km areas are moderately dense forest.
Bibhuti Prasad Lahkar, Programme Secretary and Head, Elephant Research and Conservation Division of Aaranyak, an NGO on conservation, said that degradation of the habitat, lack of quality habitat and gradual shrinking of existing habitats cause man-elephant deaths and frequent conflicts.
“Insufficient forest personnel, non-involvement of civil administration and other stakeholders is leading to a situation of great concern. Involvement of the villagers and volunteers to deal with the situation is very crucial,” he said.
Lahkar said that the wild elephants hugely destroy crops, property and food of the villagers but they do not get sufficient compensation from the government.
“If the poor villagers do not get compensation for their damaged crops and properties they will not be involved in the protection of wild animals and the environment,” he pointed out.
Lahkar said that besides quality habitat, elephants require a huge amount of fodder and water, both of which are drastically reduced in the degraded forest and mountainous areas.
Assam’s Forest and Environment Minister Parimal Suklabaidya said that the government has decided to create nine elephant corridors in the eastern part of the state.
He said that a committee had been constituted to make an on-the-spot verification of the areas for delineation of nine animal corridors in the UNESCO world heritage site — Kaziranga National Park and Tiger Reserve — and the committee had submitted its report to the government. 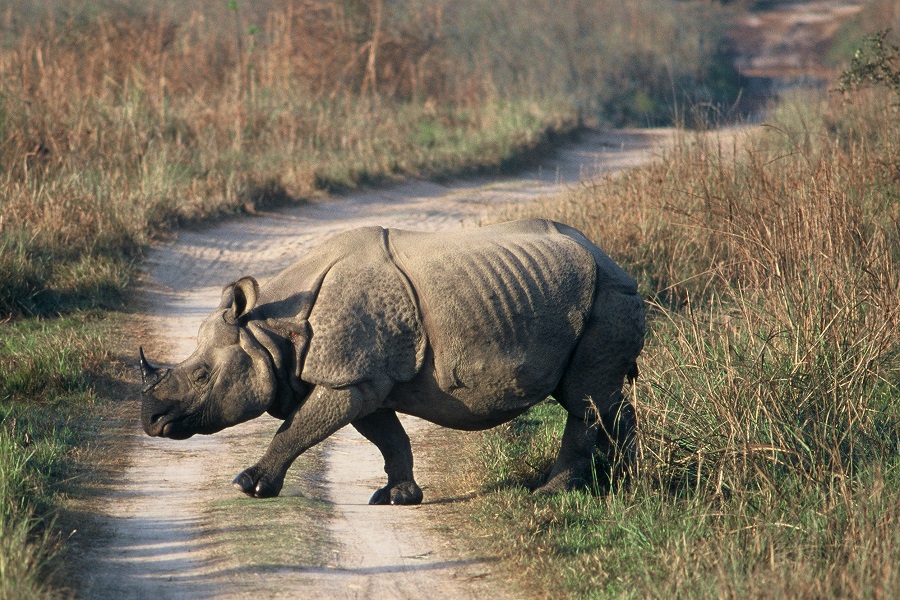 “The state government would take all possible steps to ensure the protection of wild animals specially the elephants, tigers and rhinos. We are also constantly spreading awareness among the people about the protection of the wild animals and their habitats,” the minister said.
The state government also took numerous steps to stop illegal activities killing the animals and destroying forests and the environment.
“Poaching of rhinos and elephants for their horn and tusks respectively has been drastically reduced following the steps taken by the forest department,” the minister said.
“Coordination committees were constituted with all stakeholders and forest officials to coordinate to prevent accidental deaths of elephants along the railway lines.
“Railway tracks in several vulnerable areas prone to elephant accidents and deaths have been identified. Forest and railway staff and other concerned people are monitoring those accident prone areas while signages are displayed at vulnerable locations alerting the train drivers,” Suklabaidya said.
Other steps taken to check the deaths of elephants due to speeding trains include cleaning of vegetation along the railway tracks to increase visibility, deployment of anti-depredation squads to prevent elephant fatalities due to train hits, using trained elephants (‘kunkis’) to monitor the movement of wild elephants.
The Central Empowered Committee (CEC), set up by the Supreme Court, has recently asked the Assam government to take immediate action to remove illegal constructions in nine identified wildlife corridors of Kaziranga National Park and Tiger Reserve, which extends across Assam’s Golaghat, Nagaon, Sonitpur, Biswanath and Karbi Anglong districts along the Arunachal Pradesh border.
An Assam Forest Department official said that the CEC’s Member-Secretary Amarnatha Shetty, in a letter to Chief Secretary Jishnu Baruah, asked for an action taken report within four weeks.
“It is requested that immediate action be taken to remove all constructions made in violation of the Supreme Court order of April 12, 2019 and not to permit any new constructions along the nine identified animal corridors,” the letter said.
The CEC has also referred to the inspection report submitted on September 10 by the Union Environment, Forest and Climate Change Ministry’s Integrated Regional Office, Guwahati, head Hemen Hazarika, which also enclosed the report of the Deputy Inspector General of Forest (Central) Lactitia J. Syiemiong, on “Violation of the Supreme Court order of April 12, 2019”.
Besides the study of Syiemiong, Assam-based green activist Rohit Choudhury lodged a complaint with the Union Ministry on May 10 pointing out the illegal new constructions in the animal corridors in contempt of the Supreme Court’s direction.
The official said that the Supreme Court earlier barred new construction on private land that forms part of the nine identified animal corridors of Kaziranga, which is home to more than 2,400 one-horned Indian rhinos. IANS
Tribune Shorts
A –
A +
What do you think? (Share your feedback)
Most Read
Don’t Miss
SUBSCRIBE TO OUR NEWSLETTER
Himachal, Madhya Pradesh report first Omicron cases
All the nine infected people had returned from abroad
Omicron scare: Night curfew imposed in Karnataka from 10 pm to 5 am till January 7
State government bans New Year parties and gatherings at pub…

Drug mafia-politician nexus still thriving, FIR not enough: Navjot Singh Sidhu
Says no effort has been made to extradite 13 NRIs named in a…
2,000 cops, drones, sniffer dogs: All set for Modi’s visit to Himachal’s Mandi on Dec 27
The rally venue—Paddal Ground—is already out of bounds for t…
‘Ladki Hoon, Lad Sakti Hoon’: Thousands of girls raise slogans after Jhansi and Lucknow admns cancel permission for ‘Mahila Marathon’
Congress had announced marathons for women in Lucknow and Jh…
View All
Teacher unions call on Kejriwal, demand resolution of issues

5 years on, no headway in Maur blast investigation

9 counting centres set up across Chandigarh

After month-long hectic campaign schedule, candidates get time to relax

No new case in Jalandhar

No fatality, seven fresh cases of Covid in Ludhiana district

The Tribune, now published from Chandigarh, started publication on February 2, 1881, in Lahore (now in Pakistan). It was started by Sardar Dyal Singh Majithia, a public-spirited philanthropist, and is run by a trust comprising four eminent persons as trustees.
The Tribune, the largest selling English daily in North India, publishes news and views without any bias or prejudice of any kind. Restraint and moderation, rather than agitational language and partisanship, are the hallmarks of the paper. It is an independent newspaper in the real sense of the term.
The Tribune has two sister publications, Punjabi Tribune (in Punjabi) and Dainik Tribune (in Hindi).
Remembering Sardar Dyal Singh Majithia
Designed and Developed by: Grazitti Interactive

10 top pet food companies headquartered in the US – PetfoodIndustry.com